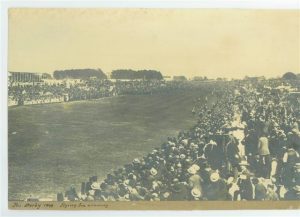 Flying Fox [the horse] wins the Derby in 1899 scanned from an image provided by Gerry Wood.
He was sired by Orme who in turn was sired by Ormonde, the 1886 Triple Crown winner. Their victories made owner Hugh Grosvenor, 1st Duke of Westminster, the only person to own two English Triple Crown winners. His dam was the high-strung mare, somewhat aptly named Vampire, by Galopin.
The Duke of Westminster died near the end of 1899 and the following year Flying Fox and many of the other horses in his stable were put up for auction. Purchased for a record 37,500 guineas by the prominent French sportsman Edmond Blanc, he was brought to Blanc’s Haras de Jardy horse breeding operation at Marnes-la-Coquette in what is today part of the western suburbs of Paris.
Standing at stud at Haras de Jardy, Flying Fox enjoyed considerable success and was the leading sire in France three times, with his progeny earning ₤203,400 in prize money. Among his first crop was the colt Ajax, an undefeated winner of the Prix du Jockey Club as well as the Grand Prix de Paris who himself became a leading sire. Ajax was the sire of Teddy, who sired Sir Gallahad III plus the mare La Troienne who is widely regarded as one of the most influential broodmares in the history of modern Thoroughbred breeding. Flying Fox’s other progeny included numerous top class winners including Val d’Or and Dagor. Descendants of Flying Fox include Gallant Fox and Citation, the 1930 and 1948 United States Triple Crown Champions and U.S. Hall of Fame colt Coaltown.
Flying Fox died at Haras de Jardy on 21 March 1911 at the age of fifteen. His skeleton is at the horse museum at Château de Saumur with a memorial at Eaton Stud in Cheshire, North West England.