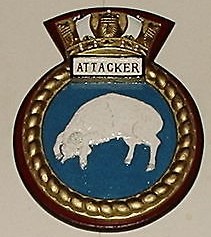 The Attacker class was constructed by Fairey Allday (Fairey Marine Ltd), on the River Hamble in Hampshire, England. HMS ATTACKER was built in Cowes, on the Isle of Wight, while the rest of the class were built in Southampton.

The Attacker class was decommissioned from the Royal Navy during 1991 and 1992. All five ships were sold to the Lebanese Navy in July 1992. HMS ATTACKER (P281) was renamed Trablous in 1992.