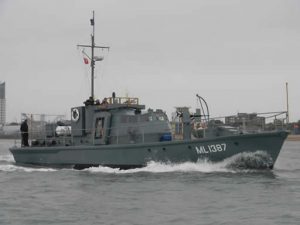 Post war, HDML 1387 was re-designated FDB 76 and was allocated to Cardiff University in 1945, and then in 1947 to Severn Division RNVR as a training vessel. In 1949 she was allocated to London Division RNVR and temporarily assumed the name HMS Thames. Whilst in London she was re-designated Seaward Defence Motor Launch (SDML) 3516. In 1953 she became a Hydrographic Survey Vessel with the pennant number A 323, and was finally named HMS Medusa in 1961. In 1968, after 25 years’ service, she was sold by the Admiralty in a condition they considered fit only for the breakers. She was purchased by a group from Weymouth and then, over a period of 18 years, was painstakingly restored to a seagoing condition once again, such that her life was extended to more than 60 years. The Medusa Trust was formed in 2002 to take ownership of the vessel, and raise funds for a major restoration programme.[See Links].